In 1996, during the ADGPA Convention in Italy, Marcel Dadi calls him on the stage during the evening final concert to play “One for Marcel” his first “superpicking” composition dedicate to the great french master. After this incredible first time with the bigs of fingerstyle guitar (he shared the stage with Paolo Giordano, Ed Gerhard etc…) Paolo played for important music shows. In 2000 Paolo played in Venice during the shows for the carnival and then he shared the stage with people like Tim Sparks and Muriel Anderson during some other concert.

In 2002 he plays opening acts for William Ackermann and Don Ross who has beautiful words for him. Then he comes out with his first CD “Con la Chitarra” (self production) a work which contains seven original compositions and seven covers (some played with his acoustic quartet) like “Nuovo Cinema Paradiso” for fingerstyle solo guitar and a special rom track with the tabs played in the cd: a new product in the field of acoustic guitar works.

In 2003 he begins a collaboration with the American folksinger Jacqueline Perkins and Walter Lupi, and wins the first prize as best author/performer on acoustic guitar at the “New sounds of acoustic music” during the international guitar meeting in Sarzana – Italy.

In 2004 he comes out with his Method on Superpicking and Fingercussion Guitar dedicated to Marcel Dadi “superpicking” guitar technique.

He is endorser for the SR Technology, one of the best european factory of PA Systems and combo for acoustic guitar.

Defined “a talented guitarist” by Franco Morone, Paolo now lives and works for the local University in Parma, in the north of Italy, alternating teaching activity with concerts and, a few times in springs, a fingerstyle busker practice…

Bridge Guitar Reviews
Comments are Off 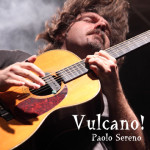 Vulcano! New CD
Comments are Off

Supereva
Comments are Off